The Fuerte avocado is often recognized as the archetypal avocado, green in color, pear-like in shape, and ranging from six to twelve ounces in size. It has smooth, medium-thin skin that peels easily, with dense, pale green flesh. It is marginally oily with a rich, creamy flavor and notes of hazelnut, and it is still considered by many to be the best tasting avocado. The Fuerte avocado tree is large and spreading, one of the more cold-hardy varieties, and the leaves have a strong anise smell when crushed. The fruit set of the tree is irregular, as some trees never seem to have much fruit while others are productive, and it has a tendency to alternate in bearing, producing an adequate crop every other year, depending on weather at setting time, along with other factors. Avocado trees differ in the types of flowers that they have. Type A have female flowers in the morning and male pollen-producing flowers in the afternoon, and Type B, like the Fuerte avocado, are the opposite. Fruit set in Fuerte avocado trees often improves dramatically when the trees are inter-planted with varieties that have Type A flowers because more pollen is available. When temperatures are less than ideal for fruit set, Fuerte avocado trees may form fruits that are stimulated to grow by the pollen tube but never undergo fertilization, resulting in small, narrow seedless fruit called “cukes”, which may be harvested and sold as cocktail avocados. Unlike most fruits, the avocado does not ripen on the tree and instead begins to ripen once harvested, and their sugar level actually decreases as they mature. Their skin remains green, and the fruit will yield to gentle pressure when ripe.

Fuerte avocados are available from early March to September.

The Fuerte avocado is the original high quality California avocado, and it is so well known in the markets that the color and texture of its skin, shape of its fruit, and its weight and size are often considered a standard for judging other varieties. It is known as a green-skinned variety, along with zutano and reed avocados, characterized by their green coloring when ripe and their thin skin, which naturally makes them more susceptible to disease. The avocado species is generally divided into three races: Mexican, Guatemalan, and West Indian. While each has distinctive features, cross-pollination permits the development of unlimited varieties. The Fuerte avocado is a hybrid between Mexican and Guatemalan types. Avocados are members of the Lauraceae, or Laurel family, which includes the plants that produce edible cinnamon, camphor, sassafras and bay leaf, and they are scientifically known as Persea americana Mill.

The avocado contains more protein, potassium, magnesium, folic acid, thiamin, riboflavin, niacin, biotin, pantothenic acid, vitamin E, and vitamin K per ounce than any other fruit. The avocado is also unique in that it has monounsaturated fat, such as oleic acid, which is thought to prevent breast cancer and prostate cancer. These fatty acids may also help lower LDL cholesterol in the body while raising the levels of healthy HDL cholesterol.

The creamy flesh of avocados is most often used raw, such as in salads or dips. It is advisable to avoid exposure to direct heat, such as broiling, and instead cook the avocados only briefly or add them at the end of long-cooked dishes. The high fat content of avocados combines well with acidic fruit and vegetables, such as citrus, tomatoes, and pineapple, as well as with acidic dressings. The flesh can even be used as a substitute for butter, served on toast or added to sandwiches. Try topping a chicken penne pasta dish with thick slices of Fuerte avocado just before serving, mashing a Fuerte avocado together with a little sour cream and lemon juice to spread on crackers, or making a tasty side salad by combining baby spinach leaves, slices of Fuerte avocado, roasted pecan nuts, and grilled pieces of prosciutto. Avocados should be stored at room temperature until ripe, as they will not continue to ripen when they are refrigerated. Whole ripe avocados will keep for two to three days in the refrigerator, while cut avocados will keep for just a day or two.

The name Fuerte, meaning “strong” or “hardy” in Spanish, was given to this variety because it survived the great freeze of 1913 in Los Angeles, California. Fifty of the first budded Fuerte avocado trees were purchased from the West India Gardens in March of 1914 and planted by J. T. Whedon on his property in Yorba Linda in lieu of varieties that he originally ordered, but that had frozen in the nursery the previous year. Whedon’s became the first Fuerte avocado orchard of the hundreds of commercial ones in California today. In fact, the Fuerte avocado is the cultivar upon which the California avocado industry was built, and was the mainstay of California avocados until the 1930s when it was displaced by the hass avocado, which boasted a thicker skin and ability to handle being shipped to distant marketplaces.

On behalf of the West Indian Gardens nursery in Altadena, California, twenty-one-year-old American explorer Carl Schmidt traveled to southern Mexico in 1911 in search of quality avocados. He cut budwood from nearly thirty varieties of avocado trees from Atlixco, Mexico, numbered them and shipped them back to Altadena. Most of the buds refused adaptation to the soil and climate, but “No. 15” flourished, producing fruit of exceptional quality. That variety is known today at the Fuerte avocado. 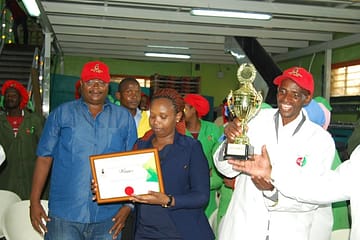 The annual awards for the best players in the avocado industry was held last month with much pomp and color. The host, Avocado Society of Kenya, through their research and statistics, picked out the best Read more…